Dalibor Grubačević is an award-winning Croatian composer of film and classical music. He has received several major professional awards in his country (the 2013 Porin in the Best Theatrical, Film, and/or TV Soundtrack category, for his music for the documentary series In Search of Marco Polo, and the Best Film Music award at the 19th Days of Croatian Cinema festival, for his music for the Nenad Puhovski documentary (Together). He is also a multifaceted artist of eclectic musical interests, whose work is best described by the contradictory label of an “unclassical classicist.” In his composition, he uses classical orchestration combined with electronic sounds and instrumentation. He is a full member of the Croatian Composers’ Society (HDS) and Croatian Freelance Artists’ Association (HZSU).

Beside film scores and feature, documentary, commercial, and corporate soundtracks, Grubačević is interested in pop, rock, and ethno music as much as in classical writing. “Two Rivers”, his cantata in two parts (I: Drava and II: Mura), based on melodies and motifs from the regions of Podravina and Međimurje, has been performed around the world, from Canada, the United States, Japan, England, Italy, Israel, and Georgia, to the region (Macedonia, Montenegro), by the Simply Brass Quintet, whose album Camminate Grubačević has also produced. In 2012, collaborating with the renowned American composer Eric Ewazen, he recorded two Simply Brass albums at the Croatian National Theatre. He has also worked with Australian composer Alan Holley.

Soundtrack composition, which has become his current stock in trade, begun with Grubačević’s well-received score for the 2006 children’s feature The Ghost in the Swamp, directed by Branko Ištvančić. Their collaboration continued with the 2014 drama The Bridge at the Edge of the World, based on an award-winning novel by Josip Mlakić. In 2016 he worked with Anđelo Jurkas on feature film Because of you and  Fuck off I love you next year. In 2022, he scored feature film The Conversation directed by Dominik Sedlar, starring Caspar Phillipson and Dylan Turner.

Dalibor Grubačević was born and educated in Koprivnica. His musical beginnings came with the pop-rock band The Bugs, inspired by the music of The Beatles, whose music he has closely studied; the band recorded a few studio albums in the early 1990’s. Later, Grubačević studied classical composition under the private tutelage of Professor Natalija Imbrišak.

In addition to his film/TV & concert music, Grubačević has had a long and fruitful career as an arranger for numerous 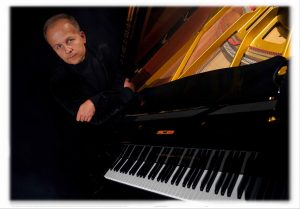 Croatian and international artists. Since 2004, he has been working with Macedonian composer, singer and producer Aleksandar Mitevski, arranging the humanitarian song “Site sme nivni deca”, which featured many Macedonian pop stars. One of them was the late Toše Proeski, for whom Grubačević had written a string arrangement for his cover of “Can You Feel the Love Tonight.” He has also arranged, Aleksandar Mitevski’s album (Kirilica), and Zoran Džorlev’s (Ne kažuvaj libe) then for Arsen Dedić, on  Mitevski’s song “Balada”. In 2014 alongside with Aleksandar Mitevski & Boban Apostolov arranged macedonian version of Daniel Kajmakoski’s song “Autumn Leaves” which won at Skopje Fest. The song was the Macedonian representative for the Eurovision Song Contest that year.  In 2015 alongside with Alan Bjelinski orchestrated song “Ja bi da te slijedim” written by Lea Dekleva (dedicated to the late Arsen Dedić). In 2018 he wrote orchestrations for Aljoša Šerić’s solo album “Što ćemo raditi do kraja života” and in 2020 orchestrations for Croatian pop-rock band Pavel for the album “Ennui”. Grubačević has also produced the 2008 album Fulmination by the renowned Croatian ethno-blues artist Miroslav Evačić, receiving a nomination for the country’s pre-eminent musical award, the Porin, in the Best Ethno Album category.

Also worth noting are his scores for the 2010 wartime documentary Silenced Voice (Zaustavljeni glas), by Višnja Starešina, and the documentary series Aquatic Treasures of Croatia by Miro Andrić, in addition to the aforementioned  In Search of Marco Polo, by Miro Branković.